So we are more then half way through this pregnancy (will only be going until about 36 weeks as it is twins ) and I have to say it has been both the slowest 5 months and the quickest 5 months of my life!

I have been so worried every step of the way when in reality this has been a fairly smooth and uneventful pregnancy so far…….

No bleeding, no morning sickness…….

Oh don’t worry…..I am definitely having my share of side effects but nothing concerning……..Mostly I have had crazy headaches, back pain, constant peeing and most recently heartburn….oh and wait for it…….I have already gained 25 pounds+! Fun! I really can not complain though……

Nah….I wouldn’t trade any of it for a million dollars!  I just can’t wait to have these little ones in my arms. Healthy and happy.

And just in case you were hoping to see weekly bump pictures……here ya go! 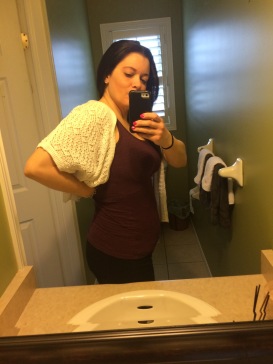 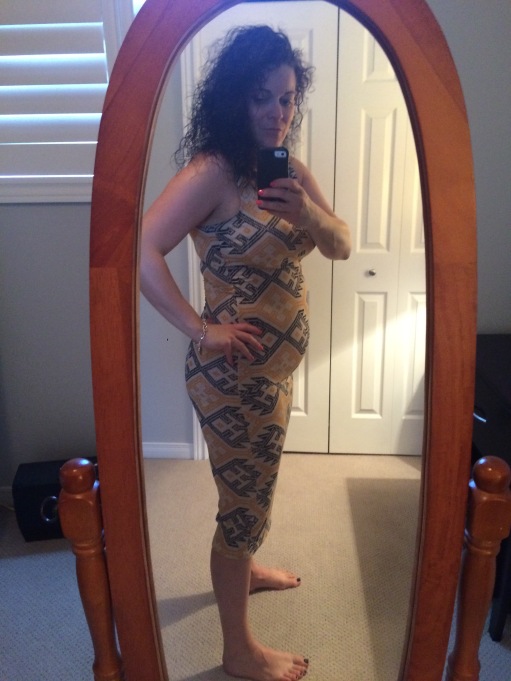 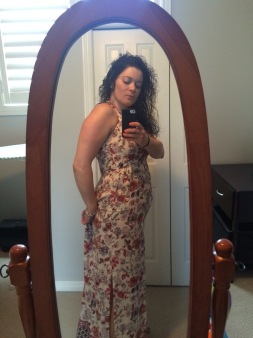 Isn’t it nice to see that the weight has been distributed ALL over my body….not just centre mass…..cause you know what would just give me a cute baby bump and pfffff who needs that!

A couple weeks ago I got impatient waiting for my next Ultrasound and decided to book a private scan on a Sunday morning……When you are an IVF patient all the mystery and surprise is taken out of this whole process and I really wanted a little bit of that back…….So I headed to the scan at 9am on a Sunday and told nobody except Shane……US was quick and with genders sealed in envelopes I headed to the party store and had 4 giant balloons blown up. 2 Blue and 2 Pink……We were headed to the beach with Shane’s cousin and his girlfriend for the day and I had an idea……

So long story short we did a mini gender reveal at the beach…….Mark opened the envelopes and without looking up he told us what balloon each to release…..The pictures are literally when we found out the genders of the twins! 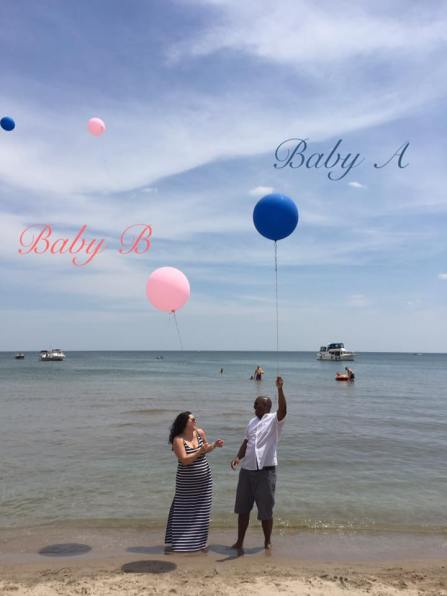 One boy and one girl!

Such a happy day!

I was holding off writing until we told our families our news!

No seriously! I didn’t trust myself to blog and not spill the beans!

So now most people know I wanted to share here!

END_OF_DOCUMENT_TOKEN_TO_BE_REPLACED

Well I know HOW it happened, I just couldn’t believe that some how it did!

It was 7pm at night….too late to call the clinic…..I went downstairs and told Shane…..Best moment of my life…..The look of pure joy and love on his face was priceless…..he kept saying “are you sure?” “is this real?” We didn’t sleep much that night and I was up at 6am to drive to the clinic to get blood work done!

Later that day my Beta test came back at 948! It was a bit surreal…..I was still spotting but my Nurse said don’t worry about it unless it is a lot of bright red……I was told to come back in a few days for another Beta.

We were just through the roof, but still afraid to believe it……

Our joy was gone as fast as it came…..

And I thought the failed transfer felt bad….this was knock the wind out of you crushing…….2 days before Christmas. So now we had to wait for my HCG numbers to drop to zero before we could transfer again…..

I made a appointment with my RE and tried to stop crying……My numbers took a couple weeks to hit zero and I spotted for three weeks…..We are just waiting for AF to start this next cycle….hoping for some good news soon…..we could use it.

Our egg retrieval went great and at the end of the 5 days we had 6 Blasts heading to the freezer (Our clinic only does Frozen transfers).

On October 29 we started our Frozen Transfer Cycle. I have been doing acupuncture since the retrieval cycle and continued this….I had also felt well enough  to get back to the gym and to running. We had a unusually warm November and I was chomping at the bit to get out there!

About 10 days into the cycle there were some concerns with my lining being a bit thin (never had this issue before, probably due to all the meds the past couple months) either way I was told NO more running. Fuck.

I was on a medicated cycle (to stop ovulation), and we were scheduled for transfer November 18! We were so excited….Shane was pretty pumped to be able to come in the room to watch the Transfer……

I was off work for the whole cycle, so I took it easy for the most part. I did host HK’s Baby Shower 4 days after the Transfer but that was pretty low key……

I held out hope that maybe, just maybe, it was wrong…..But I knew it wasn’t. I was home alone that day….it was a pretty emotional day….lots of tears…..I just didn’t have it in me to tell Shane yet……Let him have one more night of hope. The next morning the blood work confirmed the HPT……..Devastated.

We grieved but had only a couple days to make a decision…..we decided to transfer again right away……This time we opted for a natural cycle and the Doctor was fine with it since I have such a regular cycle. I kept up with the Acupuncture and also added Bioptron Light Therapy…..I also decided to work up until a day before transfer this time to keep me busy and give some normalcy to my life……..

I felt AMAZING! No medications and light workouts I felt more like myself….I knew this one was going to work…I felt it in my soul. I went for blood work and ultrasound on day 11 of my cycle (I was working on day 10 so they said no big deal to come on day 11) I went in and they confirmed lining was over 8 and triple striped and I had a mature follicle……Transfer was scheduled for December 14…..This was going to be the best Christmas! After leaving my day 11 appointment I made a few stops to pick up some Christmas stuff, and while in the store I received a call from the clinic….They were cancelling my transfer…..WTF….How? Why?

My blood work confirmed that I already ovulated and they don’t know when and I needed to be on some medications 5 days prior to the FET……My clinic knows I ovulate early on my own and never should have waited to screen me until day 11…..I broke down….completely…..Why is this happening?

Shane is my rock….even though I knew he was hurting he made sure I was ok……Such an amazing man.

Plus he ain’t bad to look at!

Life goes on and we started to plan for the next cycle….I needed to speak with my Doctor to see what happened and to make sure this doesn’t happen again……About a week or so after the cancelled FET I started spotting a bit…..weird because I never mid cycle spot……After 2 days of it I was a bit concerned so I took a HPT to rule that out…..I got home from work….POAS and jumped in the shower….expecting it to be negative when I got out of the shower…….I got out and glanced down and saw 2 solid pink lines…..

It has been a crazy couple of weeks! Our close friends are expecting a baby boy in October……Omar and Chichi…..